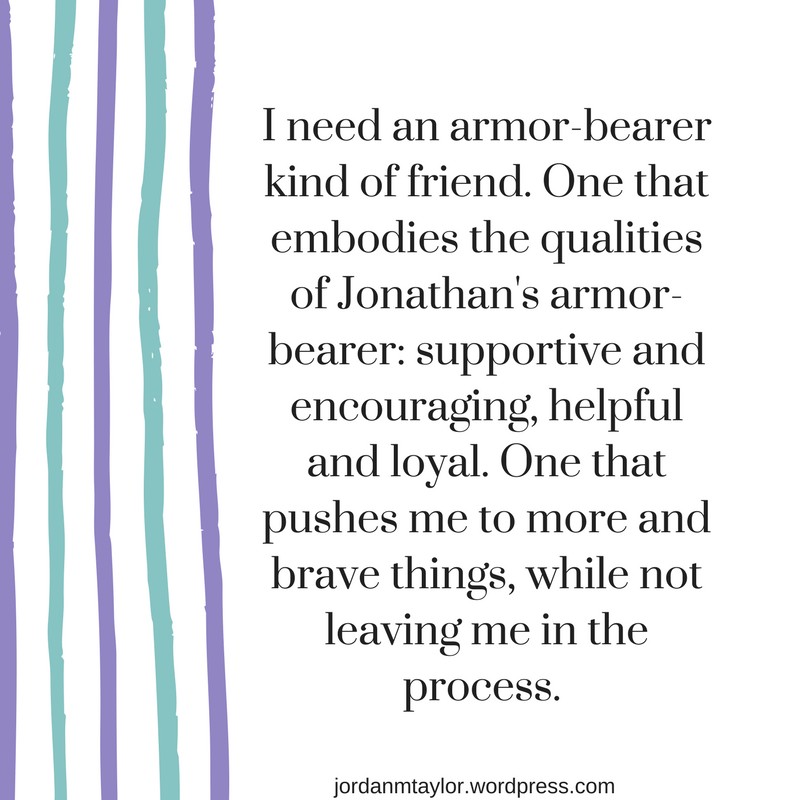 1 Samuel 14:7 has been one of my favorite verses since college. It’s a sweet reminder to me of God’s all-knowing guidance wherever I go:

His armor-bearer responded, “Do what is in your heart. You choose. I’m right here with you whatever you decide.” (CSB)

“Do all that you have in mind,” his armor-bearer said. “Go ahead; I am with you heart and soul.” (NIV)

Jonathan said to the attendant who carried his weapons, “Come on, let’s cross over to the garrison of these uncircumcised men. Perhaps the Lord will help us. Nothing can keep the Lord from saving, whether by many or by few.”

7 His armor-bearer responded, “Do what is in your heart. You choose. I’m right here with you whatever you decide.”

8 “All right,” Jonathan replied, “we’ll cross over to the men and then let them see us. 9 If they say, ‘Wait until we reach you,’ then we will stay where we are and not go up to them. 10 But if they say, ‘Come on up,’ then we’ll go up, because the Lord has handed them over to us—that will be our sign.” Reading the verse in context, mixed with life happenings that changed my perspective, made me look at it in a new way.

I’ve always read this verse as the armor-bearer representing God. I don’t think this is necessarily a wrong way to read the verse; for the season of life I was in when I first read this verse, that is what I needed it to be, I think. I was trying to figure out my life, my dreams, and my plans, unsure of my next steps. I didn’t know where God was leading me or what He had called me to anymore. I needed the comfort that God was with me, heart and soul, that he was going to use my gifts and my talents and my dreams right where I was, whatever I did with them. I didn’t fear doing the ‘right’ thing as much when I read this verse–I felt that as long as I was trusting that God was with me no matter what, I couldn’t go down a wrong path.

With all my struggle on calling and careers and the future, this verse has acted as a reminder for my must-figure-life-out-ness and desire to know my future before it happens.

That is what I’ve needed that verse to be for me at the time. But now, I’m reading it differently, from a different place in my life.

While studying this verse in a more recent context, I didn’t see God as an armor-bearer anymore. I saw people. Community. Friends.

It made me realize I need an armor-bearer in my life. Or a better one, at least.

Upon reading this verse in this light, I decided to check out a few commentaries for a definition of an armor-bearer. I could kind of guess what they were based on context (that English degree did teach me something!) but I wanted some more depth.

The words “armor-bearer” literally translate to “the one carrying the armor.” It’s defined as “One who carried the large shield and perhaps other weapons for a king, commander in chief, leader, etc.” (source)

The armor-bearer was a leader or warrior’s right-hand man, carrying weapons and armor to and from battle. He worked for and with the leader; he was his helper, his encourager, his support.

He was his person. Reliable and capable, supportive and strong, a guiding force that carried their respective leader or warrior’s life in their hands. Where the leader went, so the armor-bearer went too.

When we get to this point in 1 Sam 14, Jonathan is wanting to go against protocol and charge towards the Philistines. He fully trusted that God would be on his side. Jonathan fully depended on God to carry him through the battle, so he decided to go for it. When he told his armor-bearer his plan, 14:7 was his response.

7 “Do all that you have in mind,” his armor-bearer said. “Go ahead; I am with you heart and soul.”

His armor-bearer was with him heart and soul. He would go alongside him no matter what. He supported him. He encouraged him. He knew Jonathan and trusted God too, so he trusted Jonathan’s judgment. So together, they went off to battle and came out victorious (for now).

A lot of the commentaries I read on this verse talk about the encouragement and support of the armor-bearer:

Who could not win victories backed by such armor bearers as that? Go back through history and you will see that the men who have done the greatest work in the world are the men who have been backed by faithful helpers with staunch and loyal hearts. (source)

“Armor-bearers in ancient times had to be unusually brave and loyal, since the lives of their masters often depended on them.”

Jonathan’s armor-bearer was a man of resource and courage. (source)

This embodies what an armor-bearer was in scripture. Dependable, encouraging, helpful, loyal, brave.

In a lot of ways, I think it embodies what we’re called to be to each other.

We’re called to be armor-bearers for one another.

Are we literally carrying armor into battle for each other? I sure hope not. But we still carry each other– our stories, our hurts, our joys, our tears. At least we’re supposed to do that for each other, right? We all need people like an armor-bearer in our lives. Someone we depend on to help lighten the load as we walk into whatever battlefield we’re going into. Someone who will boldly encourage us, while gently reminding us that they’re with us no matter the outcome. People that are loyal and brave and willing to support us through it all.

We need people who will be a bearer of our lives, no matter what’s going on or what we do.

One of the things I’ve talked to God a lot about lately is my need of a friend. I have friends– a community of friends I love spending time with, whenever we can.  But I need not just community, but a friend. A best friend. Someone I feel like I can text funny things or serious things without feeling a tinge of guilt or burdensomeness, one that will actually respond more than 1 or 2 words. One I can be honest about my life with– and all of it, not just bits and pieces I usually share. I’m tired of shallow relationships, to put it bluntly. I’m tired of always being the one to text first, without the lack of a response. I’m tired of being an afterthought or forgotten about. I’m tired of thinking I’m a close friend with someone, only to find out that they don’t think we’re as close as I think we are. I don’t want half-assed friendships where I’m only remembered when I’m needed or only thought about when I initiate the conversation. I’ve had enough of those in my life.

Don’t get me wrong– I have some good friends. But a lot of friends have come and go or just fizzled out. I get that life happens and things and people change. I get that life gets crazy busy and circumstances sometimes keep us apart from each other. But I feel like I’m the friend that always gets left in the cold. And I’m tired of trying to be a better friend without reciprocation, or at least an attempt to be a friend back. Friendship has to involve at least two people, ya know? It requires work and honesty and vulnerability on both sides. I’m trying to deliver on my part. I don’t want to be enough of a friend for two of us, and it’s hard for me to be honest and vulnerable if I don’t think you’re going to stay. My prayers for better and stronger friendships were met with this scripture. Funny how God works sometimes.

I need an armor-bearer kind of friend. One that embodies the qualities of Jonathan’s armor-bearer: supportive and encouraging, helpful and loyal. One that pushes me to more and brave things, while not leaving me in the process.

Rant/segue: I don’t need flighty people that come and go in my life. I’ve had enough of that kind of relationship in my 25 years. It doesn’t hurt any less the more it happens to you, by the way. You continually second guess yourself, and your worthiness of friendship when people keep leaving you. You get to feeling like you’re alone and no one actually wants to spend time with you, but do so begrudgingly when you ask to. You feel like you’re doing something wrong or annoying everyone– and even if you are, you wish people would tell you what it is so you could fix it! When people come and go, you get the impression that you’re not worth staying for. I’ve felt that way about myself pretty much my whole life; I don’t need friends making me feel like that too. /rant over Where does one find this type of friend? An armor-bearer type that actually tries to be there for you, loves you despite your faults and annoyances, and will walk alongside you in every chapter? (Especially the hard ones).

I haven’t figured it out yet. I’m afraid to, honestly. Because I’m afraid of more of those friendships where I think we’re better friends than we actually are, and I’m afraid people are going to keep coming and going like I’m a revolving door of friendship.

But I want it. I need it. I’ve been living at home since June, and can count the times on my hand I’ve spent time outside it with someone besides my mom. I live in my middle of nowhere hometown and few to none of my friends live here anymore– for good reason. (I love MJ, but it’s freaking boring). I go days on end without texts or any kind of social interactions from people besides family. 99% of my texts/calls are from my mom. I am not proud of this fact.

But in the paraphrased words of Flannery O’Connor: a good friend is hard to find.

2 thoughts on “finding my armor-bearer.”